Miami Dade Library To Close Nearly Half its Branches

Published 7/18/2013
Miami-Dade Public Library System (MDPLS) will have to cut 22 branches (out of 49), and 251 jobs, as well as reducing hours across the board, the Miami Herald reported on July 15. According to the Herald, the libraries were chosen based on geography and on whether they’re based in county-owned buildings or rented storefronts.

The cuts are the result of a $15 million library budget shortfall. (The system had been using leftover funds to bridge the gap for the past two years.) Miami-Dade Mayor Carlos Gimenez recommended the budget which necessitates the cuts, as well as which cuts should be made, to the county commissioners, who approved his recommendation on July 16.
Source
Posted by The Library Guy at 1:45 PM No comments: 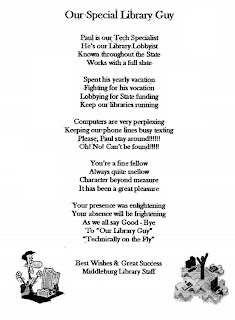 Posted by The Library Guy at 9:48 AM No comments: