Why Is One US City Stripping the Word 'Public' from Public Library?

Since its inception the American public library’s prime directive has been to protect the public’s access to information.

Library usage is increasing by 15-30 percent while at the same time their budgets are being cut by 10-15 percent.
Source
Posted by The Library Guy at 7:20 AM No comments:

Below is the sample sign that we used on Tuesday morning to thank the Represenatives for all of their hard work on behalf of libraries here in FL. It measures 17" x 20" 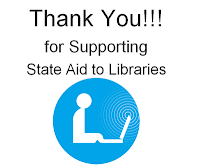 Posted by The Library Guy at 12:18 AM No comments:

Aired 5/3/2011 NPR
In order to hold on to federal dollars, the libraries needed 21.2-million. Tuesday brought good news when Paul Clark, known around the Capital as "the Library Guy" for his lobbying efforts, learned that not only had lawmakers agreed to the 21.2-million- they added in an extra 100-thousand dollars.

"The money is really important, especially for rural counties, about 33 of the 67 counties here in Florida, that money represents almost 20-percent of their total income, and when you start taking away anything, you're taking away services they provide to the public."
Source
Posted by The Library Guy at 12:06 AM No comments:

Published 5/3/2011 Suwannee Democrat
This morning, the House and Senate budget chairs of Florida agreed to fund state aid to libraries at $21.3 million. This is an increase of $100,000 from last year.
Source
Posted by The Library Guy at 7:34 PM No comments:

News from the 2011 Legislative Session

State Aid and State Library Cut Deeply in House Committee budget
Published 3/18/2011 Florida Association of Counties
Posted by The Library Guy at 12:19 AM No comments: