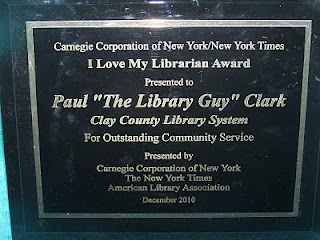 Best Library Guy
Source
Aired 12/13/2010 ActionNewsJax (TV)
Note: I am one of 10 Librarians in the country that have won this award.

Introducing the 2010 I Love My Librarian Winners
American Library Association | @ Your Library Campaign
Posted by The Library Guy at 10:23 PM